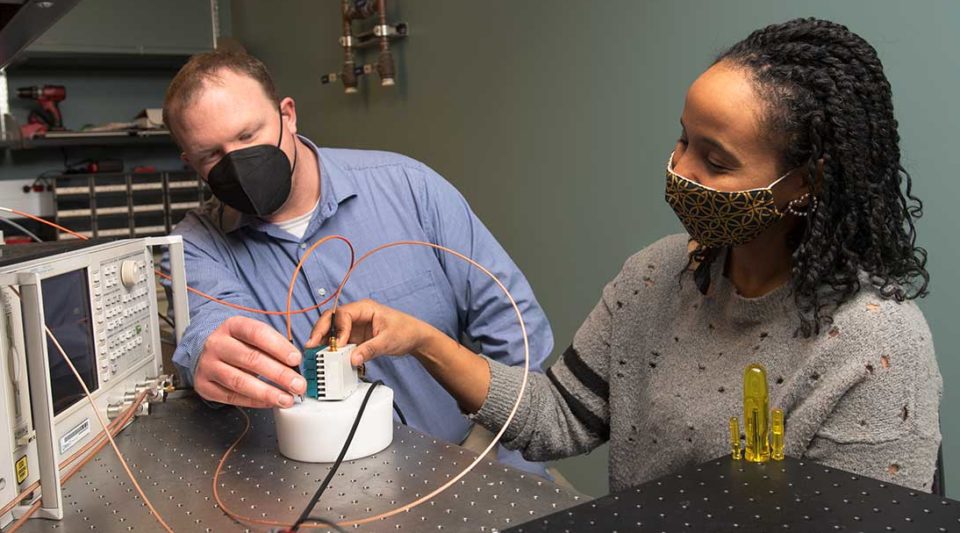 Before Wilhelm Röntgen, a mechanical engineer, discovered a new type of electromagnetic radiation in 1895, physicians could only dream of being able to see inside the body. Within a year of Röntgen’s discovery, X-rays were being used to identify tumors. Within 10 years, hospitals were using X-rays to help diagnose and treat patients.

O’Sullivan and his team are developing a powerful, pocket-sized optical imager that may once have seemed like the stuff of science fiction.

“When envisioning medicine of the future, many people think of Dr. Leonard McCoy, a physician in the original Star Trek series,” said O’Sullivan (pictured above with Ph.D. student Ola Abdalsalam).

“Dr. McCoy used a handheld tricorder to scan an individual and immediately assess injuries or diseases anywhere in the body. We don’t have a commercial product like McCoy’s tricorder yet, but we’re close to making it a reality. We’re developing new medical imaging technology that uses light to give us a better view of the function of tissues and cells deep under the skin in a way that is safe and relatively low cost.

“Equally important, we’re scaling that technology down to fit in a doctor’s pocket so it is as portable as a stethoscope or a thermometer.”

CT scans and magnetic resonance imaging (MRI) revolutionized the way diseases were diagnosed and monitored, O’Sullivan said. But they can’t be used frequently. CT scans use low doses of radiation; a single scan takes about 10 minutes and costs up to $2,500. MRI uses magnetic and radio waves. One scan takes up to an hour and can cost as much as $4,000. Both procedures require entire rooms of hardware.

“The small device we’re developing uses light, which is very safe, to help a doctor scan for the earliest signs of disease during an office visit — or even give you a device to take home,” O’Sullivan said.

“The device also could be used to monitor progression and treatment — from breast cancer to brain function to personal health — with more exacting precision.”

For this research project, which is supported through a 4-year $1.8M grant from the National Institutes of Health, O’Sullivan has engaged with collaborators at the University of California at Irvine and the University of Birmingham in the United Kingdom.