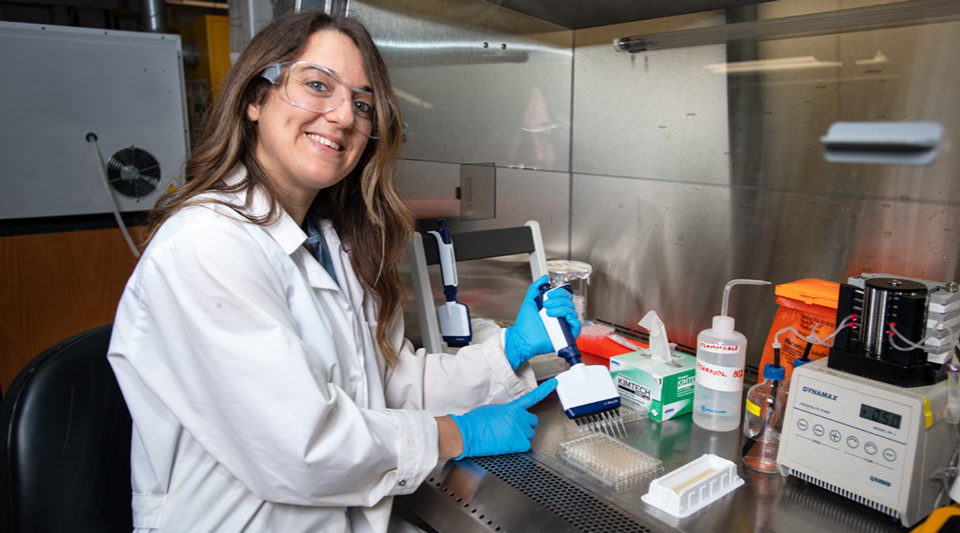 Cystic fibrosis, an inherited disease that causes patients’ airways to fill with a thick and sticky mucus, affects many people around the world.

Ireland has the highest incidence per capita — triple that of the United States — and a significant number of researchers who focus on this disease.

Treating cystic fibrosis lung infections is particularly challenging because they consist of biofilms — aggregates of bacteria encased in a gel-like matrix that are highly resistant to antibiotics.

Nahum spent the summer in Ireland working in Martins’ lab, where she learned new methods for analyzing bacterial resistance to antibiotics, especially via efflux pumps.

“We know that low-frequency ultrasound is impairing the bacteria’s ability to defend themselves,” said Nahum, “and now we have the techniques to better understand how they are doing that.”

In addition to antibiotics, treatments for cystic fibrosis include the use of vibrating vests to loosen mucus from the lungs.

The researchers envision a possible new treatment that would incorporate low-frequency ultrasound into the vibrating vest. The ultrasound could then disable the biofilms’ defense mechanisms and increase the effectiveness of antibiotics. This synergistic effect is particularly important as a way to deal with advanced stages of the disease, when multidrug resistant biofilms tend to develop.

Low-frequency ultrasound in combination with other types of antimicrobials may have applications beyond this project, Nerenberg said.

“Biofilms grow on devices in hospitals, such as catheters, joint prosthetics and pacemakers,” he said. “They’re a problem in pipes and water systems where pathogens like Legionella (the bacteria that cause Legionnaires’ disease) can grow.

“By looking at the fundamentals of biofilms — at the cellular level— we can determine where this new approach can be used most effectively.”