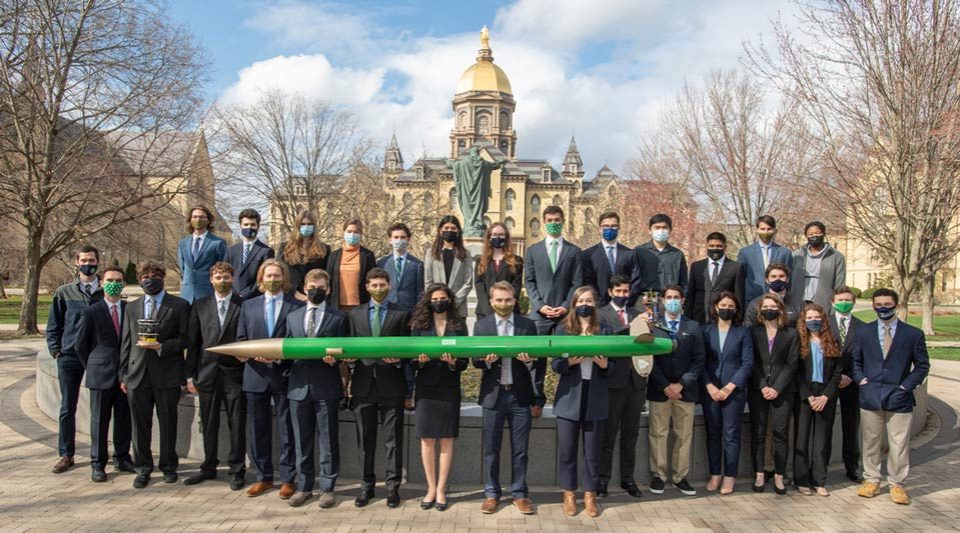 The Notre Dame Rocketry Team (NDRT) had a banner year, evidenced by the multiple awards they received at the end of the nine-month-long 2021 NASA Student Launch competition.

Their virtual season was celebrated during an online ceremony, at which Notre Dame received awards in five divisions of the competition. The team took:

The annual NASA Student Launch program challenges middle school, high school, and university students from around the country to design, build, fly, and land a high-powered amateur rocket between 3,500 and 5,500 feet above the ground.

Student teams are asked to predict their rocket’s altitude months in advance of launch day using rocketry principles and computer simulations. They tailor their altitude to maximize the return of scientific value from their payload in the same way that NASA teams target specific altitudes for their missions.

“We are a completely volunteer team,” said mechanical engineer Brooke Mumma (ND ’21), the NDRT project manager. “But we approached the challenge the same way working engineers do — going through the design cycle from concept to construction, testing, and iteration. Different subteams worked together to integrate all of the complex subsystems into our rocket.”

This year, the payload mission for college teams was a lander that deploys from the rocket during descent. The vehicle had to land upright or contain a system to upright itself, levelling within 5 degrees of vertical and taking a 360-degree panoramic image of the location, which was transmitted back to the team.

Some of the subsystems designed to accomplish the challenge, said Mumma, included a recovery system, which was capable of returning all the parts of the rocket to the team and an apogee control system, designed to help reach the target height of 5,300 ft.

“Being part of the NDRT for the last four years helped me to become a better engineer,” said Mumma. “I developed strengths in designing for manufacturing, creating thorough documentation, learning how to interface with an interdisciplinary team, and many other skills that you don’t always get in a classroom.”

For the last 20 years, NASA’s Student Launch program has provided a realistic experience for students that resembles the operational lifecycle NASA and industry engineers use when developing and operating new hardware.

Aleksandar Jemcov, research associate professor of aerospace and mechanical engineering, has served as NDRT adviser since 2014. “The NDRT team has grown from a small club to a serious 56-member organization with officers, team leaders, and a team captain,” he said.

“I have witnessed a profound change in the team’s approach to safety, design, outreach, marketing, and financial and engineering stewardship of their activities,” said Jemcov. “Students benefit from the truly collaborative environment where all technical, financial, and leadership challenges must be resolved through everyone’s contributions.”

Another significant benefit to the Student Launch competition, said Jemcov, is that a third-party professional organization (NASA) judges each team’s solutions and strategies. The feedback given to the teams helps students learn from their successes and failures.