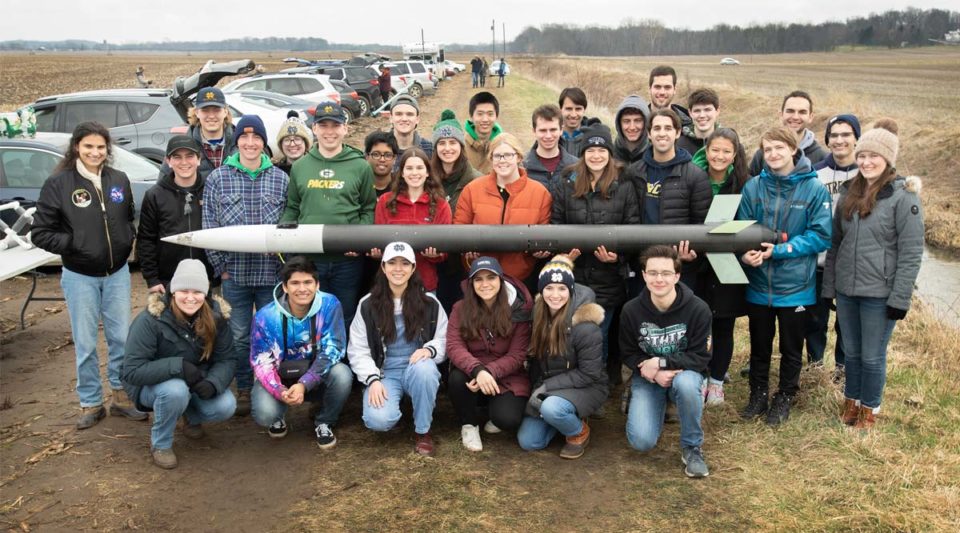 Results were announced on June 2 and take into consideration the team’s performance in areas such as altitude, safety, vehicle design and outreach.

The NASA competition gives university teams nine months to design, build, test and fly a payload and high-powered amateur rocket. Teams receive a new mission each year, inspired by challenges NASA engineers have recently faced. In previous years, teams had to collect simulated lunar ice and deploy a robot capable of taking a 360-degree picture of the landing site.

This year, the team had to determine their rocket’s landing location without using GPS — a task that simulates missions to other planets where using GPS is not an option.

“In the past, we’ve carried out NASA missions using drones or rovers,” said mechanical engineering major Jake Shapiro, the project lead. “This year, we chose to do something a little more mechanically simple, but heavy on the math and software.”

The materials used to make the rocket have become more sophisticated over time. Phenolic, a resin with the rigidity of a toilet paper tube, was initially used to create the rocket’s body, but fiberglass and carbon fiber later became preferred materials.

Membership has grown from seven in 2012 to the 50 today. Hands-on learning continues to be a priority. “You learn to think on your feet, evaluate possible fixes,” said aerospace engineering major Nandini Sadagopan, the apogee control system lead. “I’m a much more resilient engineer because of the rocketry team.”

On a warm April 23, nine months of work culminated in a final launch near NASA Marshall Space Flight Center in Huntsville, Alabama. Emblazoned with the name of the Celtic god Camulus, the 12-foot rocket—the team’s largest to date — rose on a column of smoke to reach its intended apogee of 4998 feet.

“The launch was awesome — the rocket had a smooth ascent, successfully deployed all parachutes for a safe landing, and the ground station received communications from the payload system,” said aerospace major Lauren Falk, the incoming project lead.

Jim Lampariello ’13, who started the club in 2012 and now works in the aerospace industry, has enjoyed watching the team evolve over the last ten years.

“The growth, progress, and vision exceed anything I could have dreamed of,” he said. “The Notre Dame Rocketry Team makes me proud to be an alum. I can’t wait to see what they do next.”