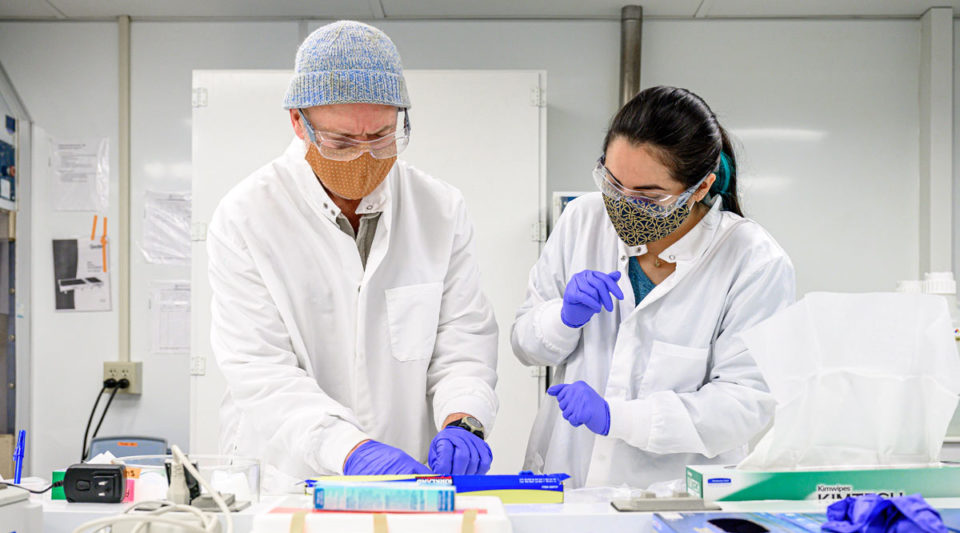 Clive Neal demonstrates the process of grinding the tiny samples of ash-like material collected from the surface of the Moon during an Apollo space mission in 1972.

His graduate student, Jessika Valenciano, will prepare the minute Moon rocks from the other 19 canisters that arrived on campus in December to measure the exact chemical makeup to the parts per billion.

It’s somehow fitting that cutting-edge geological research of samples from outside this world begins with a tool that humans began using in the Stone Age. The mortar and pestle do their job so well that they may be the least-changed tool in human history. The rounded bowl and club-shaped pestle originated in the Stone Age are nearly identical to those used in kitchens today.

Neal, a Notre Dame professor of civil and environmental engineering and earth sciences, uses a mortar and pestle to grind 50 milligrams of lunar regolith — the ashy surface “soil” of the Moon — into a fine dust that will be dissolved in hydrofluoric and nitric acids. The solutions will be analyzed in lab machines the size of an office copier in Notre Dame’s Center for Environmental Science and Technology and Midwest Isotope and Trace Element Research Analytical Center to determine the abundances of major and trace elements the samples contain.