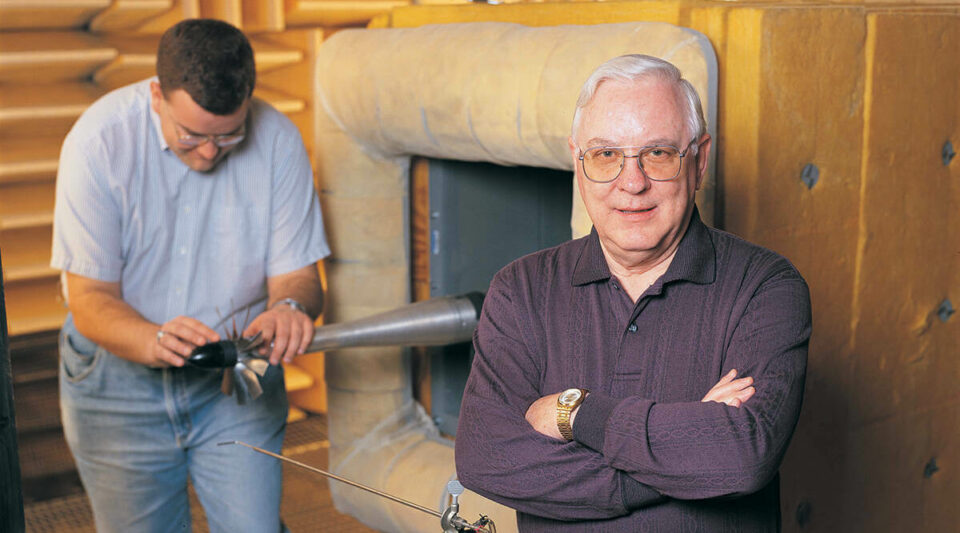 Thomas J. Mueller, professor emeritus of aerospace and mechanical engineering at the University of Notre Dame and a leading authority on aerodynamics, died Sunday (Dec. 4). He was 88.

Mueller significantly enhanced Notre Dame’s reputation in aeronautical research. In the 1970s, after making contributions to the understanding of blood flow in artificial heart valves, he began investigating new problem areas in aerodynamics. He was particularly interested in the complex movement of air around different airfoils, and his work in this area brought him international recognition from researchers in fluid dynamics.

“Professor Thomas J. Mueller was a world-renowned experimental aerodynamicist who considered flows over airfoils at both low and high Mach numbers and developed methods of flow visualization,” said Joseph Powers, professor of aerospace and mechanical engineering.

Mueller was a gifted teacher who taught at Notre Dame for 40 years.

“I had the incredible fortune to have Tom as a professor and research adviser during my undergraduate days,” said David Go, the Viola D. Hank Professor and Chair of Aerospace and Mechanical Engineering at Notre Dame. “Not only was Tom a brilliant aerodynamicist, he was a kind and supportive mentor whose impact on our department continues to this day.”

“Tom was a great colleague and one of my mentors when I started my career at Notre Dame,” said Scott Morris, professor of aerospace and mechanical engineering and director of the Institute for Flow Physics and Control. “He was passionate about aerospace engineering and wanted the best education for our students.”

Mueller also made pivotal contributions to his department’s graduate program. He served as director of engineering research and graduate studies from 1985 to 1989 and as department chair from 1988 to 1996.

He is survived by his two daughters, three sons and nine grandchildren.