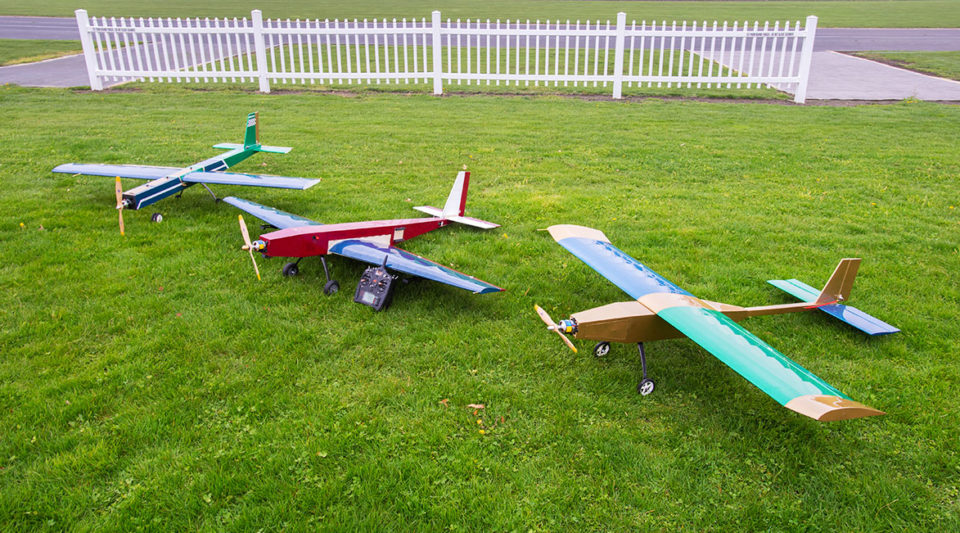 Students in AME40462 Aerospace Design, the senior capstone course for aerospace engineering majors, typically spend the weeks after spring break building the airplanes they designed during the first part of the semester. After break, they get down to business, bringing their paper design to life and flying their aircraft.

This year the COVID-19 pandemic almost grounded their flights. But with a little ingenuity on the part of Thomas Juliano, assistant professor of aerospace and mechanical engineering, graduate teaching assistants Emma Farnan, Joseph Gonzales, Yuko Inoue, and Barry Pawlowski, and volunteers from the South Bend Radio Control Club (SBRC), the students were able to watch their designs being built and then flying high in South Bend.

Each airplane, weighing between 5-8 lbs. and with a wing span of approximately 6 ft., featured a GPS antenna, gyroscope, and flight recorder. Each plane also carried a payload (up to 1.5 lbs.) and completed five laps around the SBRC course.

“The senior design course is divided into four areas — conceptual design, detail design, construction, and flight,” said Juliano. “When in-person classes were suspended in-person classes for the remainder of the semester, we did some serious thinking about how to accomplish the goals of the class and still give students as much of the hands-on experience as possible.”

The SBRC has partnered with the Notre Dame aerospace program for more than 25 years, mentoring the student teams during the construction and flight portions of the course and working with students in the Design Build Fly Club. SBRC members Bob Kistler, Dennis Lamont, and John Conley volunteered to build three of the five team designs.

“Working with students online as we built the aircraft demanded even more thought and communication than is required during a normal class session,” said Kistler. “When we’re with the students, we can discuss potential problems or things that don’t scale down from the real world. This year we pointed them out as the students watched us making the adjustments to the planes ourselves.”

Flight testing was conducted on Friday, April 24, at the SBRC field. Data recorded during the flights was analyzed to measure each airplane’s performance compared to the predictions that the students calculated during the design process.